Press enter to begin your search

Despite being burdened by an admittedly strange name (as well as having arrived rather recently in the popular lexicon of medical conditions), most academics are in agreement that Restless Legs Syndrome is indeed a legitimate medical diagnosis.

According to the National Institute of Neurological Disorders and Stroke, “Restless Legs Syndrome (RLS) is a neurological disorder characterized by throbbing, pulling, creeping, or other unpleasant sensations in the legs and an uncontrollable, and sometimes overwhelming, urge to move them.”

The condition is often accompanied by a certain itchiness or “pins & needles” sensation in the legs (and/or arms), and conditions are usually worse when at rest than active. WebMD states that RLS affects up to 10% of the population, of which most are middle-aged or older. It also impacts both genders, but more women are typically afflicted with the condition than men.

Interestingly enough, the secondary medical impacts of RLS on other parts of the body aren’t all bad. In fact, women with Restless Legs Syndrome often have better bone density than those without the condition. This finding (which came out of a study conducted in cooperation with the University of Oklahoma Health Sciences Center and Istanbul Medical School in Turkey) was in contrast to initial expectations at the onset of the study. As most women already know, osteoporosis becomes more common with age and is directly related to decreasing bone density. According to Dr. Linda Hershey, “The better bone findings in our patients with RLS than in controls may be accounted for by the increased physical activity in the night and morning hours that may serve as a form of unintended exercise.”

Unlike many medical conditions, Restless Legs Syndrome is not accompanied by a laboratory test than can be conducted to diagnose it. On the contrary, it has to be diagnosed by a medical professional based on a case-by-case assessment of the following five symptoms:

Luckily, exercise is an all natural treatment approach to RLS that many patients have found to be helpful. Additionally, there are newer medications on the market that have been approved by the FDA to treat the common symptoms of Restless Legs Syndrome.

Nevertheless, discomfort in the legs is only amplified by a corresponding discomfort in your back or neck if you’re sleeping on an inferior mattress, and seeking alleviation of only RLS without also addressing the other elements of sleep comfort can be an elusive pursuit. A luxury mattress that provides the ideal balance of support and softness will help improve overall circulation in the body, which can have positive impacts on a wide range of medical conditions, including RLS.

To learn more about how luxury mattresses from Spink & Edgar are changing the game in terms of overall sleep quality and a sense of restfulness, we invite you to see what separates our unique bed design approach from would-be competitors.

Enjoying The Scholar so far?

We hope you’ve enjoyed reading The Scholar so far, and invite you to continue learning more about the world of sleep science. Signup for The Scholar, and continue your journey toward a better night’s sleep.

A Guide to Better Sleep: Is A Luxury Bed Right For You? 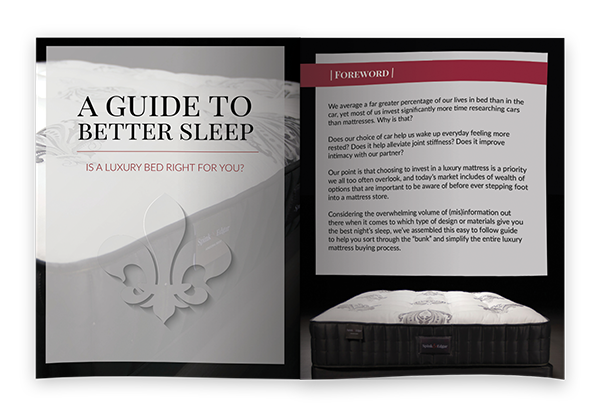 Sleep Apnea vs. Snoring: Is There a Difference?

Sleep Apnea vs. Snoring: Is There a Difference?

Read through our exclusive online magazine.